Why BJJ? - Calm Under Pressure 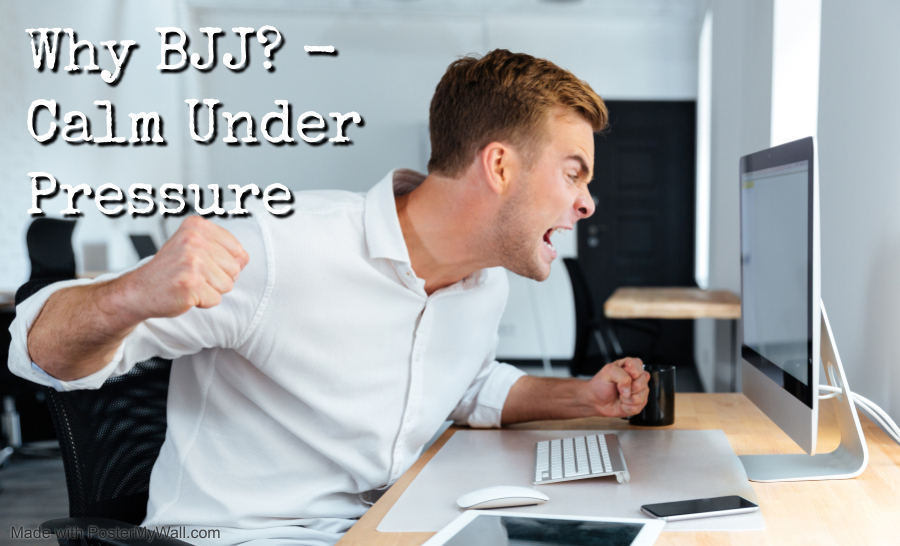 Back in my first operational squadron I had the pleasure of deploying with the coolest pilot in the squadron. And by cool I don’t mean that he was trendy or that he wore fancy clothes that everybody was jealous of… Although looking back on it I suppose that was the case too.

When I say he was cool I’m talking about cool headedness, or calm under pressure. He was a regular cool hand Luke. Nothing rattled the guy. You could get in his face about something and without missing a beat he would offer a retort that put you in your place, but he would do it in the most relaxed, nonchalant way possible. Usually with a smile on his face. You could never ruffle his feathers at all.

I’ve always admired that quality. In a person. There were some days when I was able to embody that quality more than others.

When I look back at my life I was always able to exhibit more calm under pressure after I’ve been through something difficult. I experienced this when I got home from SERE school. That’s the Navy’s Survival, Evasion, Resistance, and Escape school.

It’s basically a week out in the wilderness where you get next to no food or sleep. You learn what it takes to evade enemy forces behind enemy lines. And you get to experience what it would be like to be captured and thrown into a POW camp for a bit.

It sucks. It really sucks. Folks make multiple copies of their graduation certificates and send copies to the relatives to hold onto for them to make sure that they never get lost so that they never have to repeat that training ever again.

The same thing happened when I went to Iraq and worked with the army for a year. It sucked out there for different reasons, but long story short, when I got back home the same thing happened. Food tasted better, colors looked brighter in those little things that used to annoy me didn’t seem like such a big deal anymore.

There’s something about intense experiences and difficult things that help re-cage a person.

We judge the trials and tribulations of life on a sliding scale. It’s all relative. It’s easier to stay calm under pressure in one set of circumstances when you know you’ve been through something similar and/or worse and come out triumphant on the other end… or at least come out intact.

This is why folks who train Jiu-Jitsu for a long period of time tend to be a little more calm under pressure than your average bear.

Because for your average Joe in today’s polite civilized society there’s not much going on in their lives that can hold a candle to being stuck on the body on the bottom of a heavy crushing side control. It sucks.

You llearn pretty quickly that losing your cool effectively sabotages all of your efforts to escape. If you lose your cool, you are going to make mistakes. Against someone good, the guy on top of you will capitalize on those mistakes, and make you pay dearly for them.

But once you learn how to deal with the pressure, stay calm, and find a way out, the pressure doesn’t seem quite as bad anymore.

And just like with any other intense, difficult experience, this quality that you gain from your training has a way of carrying over to other areas of your life. Your work. Your relationships. Your family.

Train Jiu-Jitsu for awhile, and you might find that food tastes just a little better, colors look just a little brighter and the little things that used to annoy you don’t seem like such a big deal anymore.

Dealing with a lazy sack of you-know-what co-worker (okay, let’s call him Randy), who’s only talents are talking a good game and making himself look like the greatest thing since sliced bread on paper?

The boss wants to give Randy a promotion over you and tells you how you need to be more like Randy?

Working long hours at a job you hate to provide for your family who spends more money than you’ll ever be able to make in your entire life, only to come home and get an earful about how you never spend time with them much less help out around the house?

Your 10 kids are running around like inmates in an insane asylum? One of them banging your favorite coffee mug on the coffee table three feet from you while staring you defiantly in the eyes? (I’ve actually seen this one at a friend’s house)

I can’t promise you won’t blow your top. But if you’d like to wade into the deep waters of pressure, experience it, and learn how to deal with it in a way that’s healthier and more productive than just screaming at the nearest person at top of your lungs… if you’d like to be able to take this kind of stuff in stride, and maybe even find ways to win some little victories throughout the day where a cooler head would prevail, then your local jujitsu class is one of the best ways I can think of to train yourself to do just that.

P.S. And it probably goes without saying, but Jiu-Jitsu beats the heck out of going through SERE School again!

Back to Table of Contents