I've got a private lesson scheduled tomorrow with my old instructor, Dax Razzano. He's out in Bloomington, Indiana so we're going to do it over Zoom. Isn't technology amazing by the way? That would've been pure science fiction back when I was a kid. But I digress.

I'm really excited about my lesson with Dax. I've been moving around every 2-3 years for my entire jiu jitsu career, and never really thought about going back to train with, much less get promoted by one of my old instructors. One gym was just as good as another to me, and home has always been where you hang your hat. But I've been a purple belt for awhile now. I'm getting that itch to bump it up to the next level. I thought about going up the road to one of the bigger cities and training under one of their black belts. I was talking to Robin about it (my beautiful wife), and she asked me, "If had your choice... If you could get promoted by anyone you wanted, who would it be?"

And that gave me total clarity on the matter. I didn't have to think. It had to be Dax. 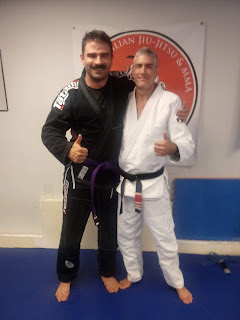 I've been doing this a long time. Over 20 years. I'm no slouch at this. I'm a big guy. And Dax is little compared to me. I outweigh him by 80 pounds. And with all that said, he threw me around like a rag doll when I got to Bloomington. Literally. There's still a hole in the wall at Razzano Academy from where he threw me into it! (Don't worry. It was drywall. It didn't hurt, but I did feel bad about the hole I made.)

Dax is a big fan of arm locks, which is perfect for me right now since I'm still on that arm locks only experiment for a little while. Dax just seems to catch arm locks from everywhere. He even catches them from butterfly guard. I know. I've seen techniques in books and video instructionals where guys catch arm locks from butterfly guard before. But Dax is really the first guy I've rolled with who actually catches them in practice on a regular basis. You really have to watch your arms when you roll with Dax.

He also has this unique blend of Wrestling, Judo, and Jiu Jitsu that I've yet to encounter anywhere else. He likes to say that any one of those three doesn't make any sense without the other two. And the way he blends those three together is just this beautiful, terrifying thing to behold. It's like watching deadly grappling voodo/black magic!

I recorded some of my rolling sessions on video before my surgery and sent them to him so that he could get a sense of where I'm at. It's been about a year and a half since I was in Bloomington. He said he thought I looked really good, but that there were a few places where I had some attacks available from mount but just didn't seem to capitalize. I feel like this is where a good coach can really help your game. Can't wait to see what he's got in store for me! 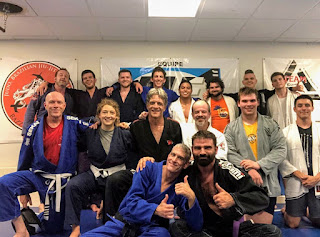 By the way, if you ever find yourself in Bloomington do yourself a favor, drop by Razzano Academy for a training session, and tell him Big Mike sent you. It's a great place to train, and I promise you won't regret it. While you're at it, you can ask him to show you the hole in the wall. It's still there.
Happy Training!

Back to Blog Table of Contents